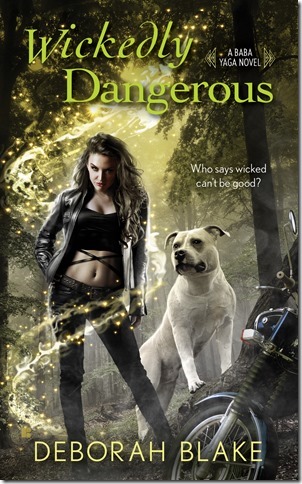 You may think you know about Baba Yaga: the wicked witch of Russian fairy tales who lives in a hut that moved about on chicken legs, rides in a mortar and pestle, and eats small children if they misbehave. But you’d be wrong. For Baba Yaga is not one woman, but rather, a title carried by a chosen few whose job it is to guard the borders between our world and the Otherworld and keep the balance of nature.

Barbara Yager is a Baba Yaga; trained since childhood by the previous holder of the title. Older than she looks, powerful beyond measure, and so far removed from the life of normal mortals, she has little in common with the human life she was born to. She travels through the country in an Airstream trailer, riding a classic BMW motorcycle and masquerading as an herbalist and researcher while she fulfills her duties. When she is summoned by a woman who is desperate to find her missing child, Barbara finds herself tangled in a web of lies and deceit, battling human enemies and Otherworld creatures, and most unexpectedly, her own heart.

Liam McClellan is the Sheriff of rural Clearwater County. Since a tragedy tore his life to pieces years before, he has dedicated himself to his job; protecting and serving the people who look to him to enforce the law. But after three children disappear in four months, without a trace or clue, Liam is beginning to wonder if he should hang up his badge. The sudden appearance of a beautiful woman with a dubious background and a curious habit of turning up where he least expects her makes him place her at the top of his suspect list, despite her uncanny gift for helping those in need. But as the danger mounts, and weird and inexplicable occurrences beset Liam and those he vowed to keep safe, he has to wonder if Barbara Yager is his enemy—or his only chance to save the lives of innocents in a world he no longer recognizes.

Natural gas drilling, political shenanigans, grieving parents, three mysterious motorcycle riders, twisted beasts out of nightmares, and yes, there are dragons. Because when Baba Yaga comes to town, nothing will ever be the same again.

You have probably heard of Baba Yaga—the archetypal wicked witch of Russian tales who lived in a log hut that walked about on chicken legs, rode through the forests in a giant mortar that she steered with a pestle, and ate small children if they didn’t behave. According to legend, Baba Yaga usually appeared as an ugly old crone, although she also wore other faces, and sometimes gave aid to a worthy seeker, if such a one could pass her tests.

You probably think you know who Baba Yaga is. But you’d be wrong. Because I am Baba Yaga, and this is my story.